This paleo cilantro lime chicken is easy to make and great right off the grill, on top of salads, or alongside roasted vegetables.
Do you like cilantro?  It’s my favorite herb by far, and I love it because it’s capable of totally perking up almost any food, both in flavor and appearance.  If you’re a cilantro hater, though, you’re definitely not alone.  According to The New York Times, many people’s aversion to cilantro may be due to the fragrance of certain substances in the herb that are also found in soap and bugs.  (Make sure to read through until the end of the article, when the author describes how he converted himself into a cilantro lover.  Here’s one hint: this recipe of mine might be a good place to start.)
For this month’s Secret Recipe Club, I was assigned the blog Angels Homestead.  It’s written by April, a mom, homesteader, and frugal cooking expert who was the owner of the SRC for several years.  April recently began cooking without grains for health reasons, and you can read a bit about her story here.  Everything I make is grain free, so I was excited to find many recipes on April’s site that fit my dietary requirements.  I was also excited to find several recipes featuring cilantro, my go-to herb.  I can only assume that April must be a fellow cilantro fan!

Even if you don’t love cilantro, I still think you should make this chicken.  You could leave out the cilantro or use basil and lemon instead of cilantro and lime, and it would still be delicious.  I don’t always love boneless, skinless chicken breasts, but this flavorful marinade really makes them shine.  I ate some of my cilantro lime chicken as is (I was HUNGRY after taking these photos!), sliced the rest, and used it to top salads for the next few days.  If you want my salad recommendation, here it is: get some butter lettuce leaves, put them on a platter, and top them with chopped cucumber, carrots, avocado, and cilantro lime chicken.  Mince a small shallot and mix it with this sherry vinaigrette (it’s basically three parts olive oil, one part sherry vinegar, one part honey, and salt and pepper to taste).  Let the dressing sit for ten minutes or so to let the flavors meld if you can stand the wait, then drizzle the dressing on the salad and devour.  That’s my kind of summer meal.

I highly recommend that you check out April’s site, especially if you’re interested in making delicious grain-free meals that don’t cost an arm and a leg.  Scroll down to the end of this post to see the other recipes from today’s reveal.  Also, if you’re a blogger and are interested in joining the SRC, you can find out more about it here. 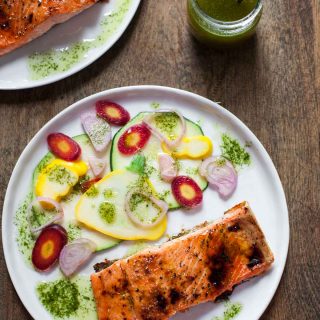 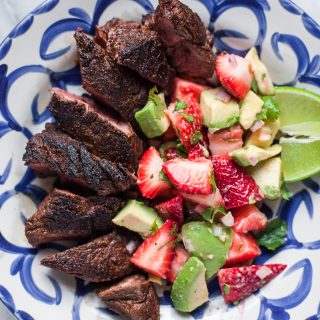