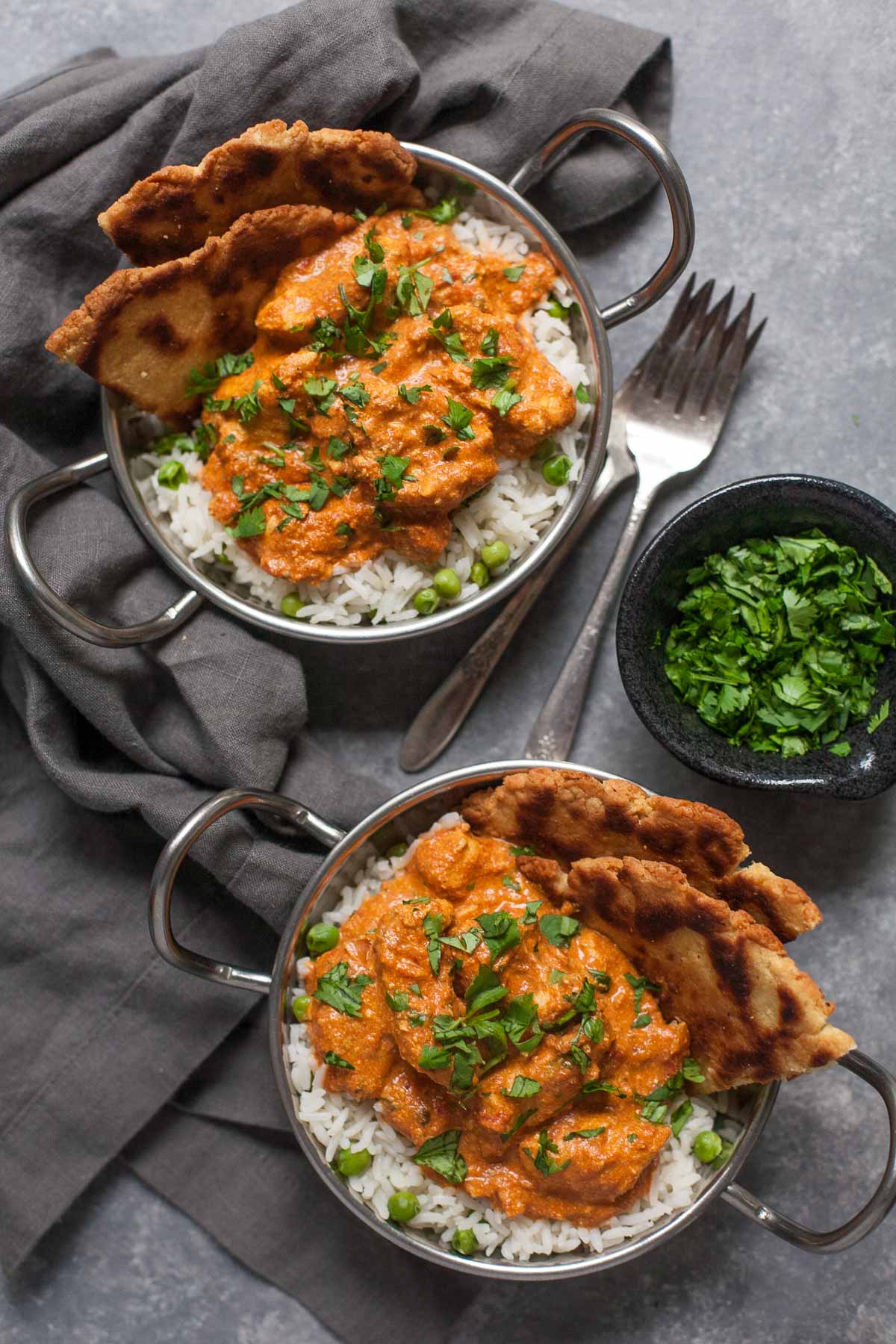 Chicken tikka masala is a favorite at Indian restaurants, but it’s even more delicious when made at home! Try it with my paleo flatbread.

Who else is a huge fan of Indian food? I think if I had to pick just one cuisine as my very favorite, Indian would be it. I just can’t pass up all the layers of spice and flavor! And while it’s great to go out and enjoy dinner at an Indian restaurant, it’s even more fun (and even tastier) to make it yourself at home. Plus, your house will smell amazing! 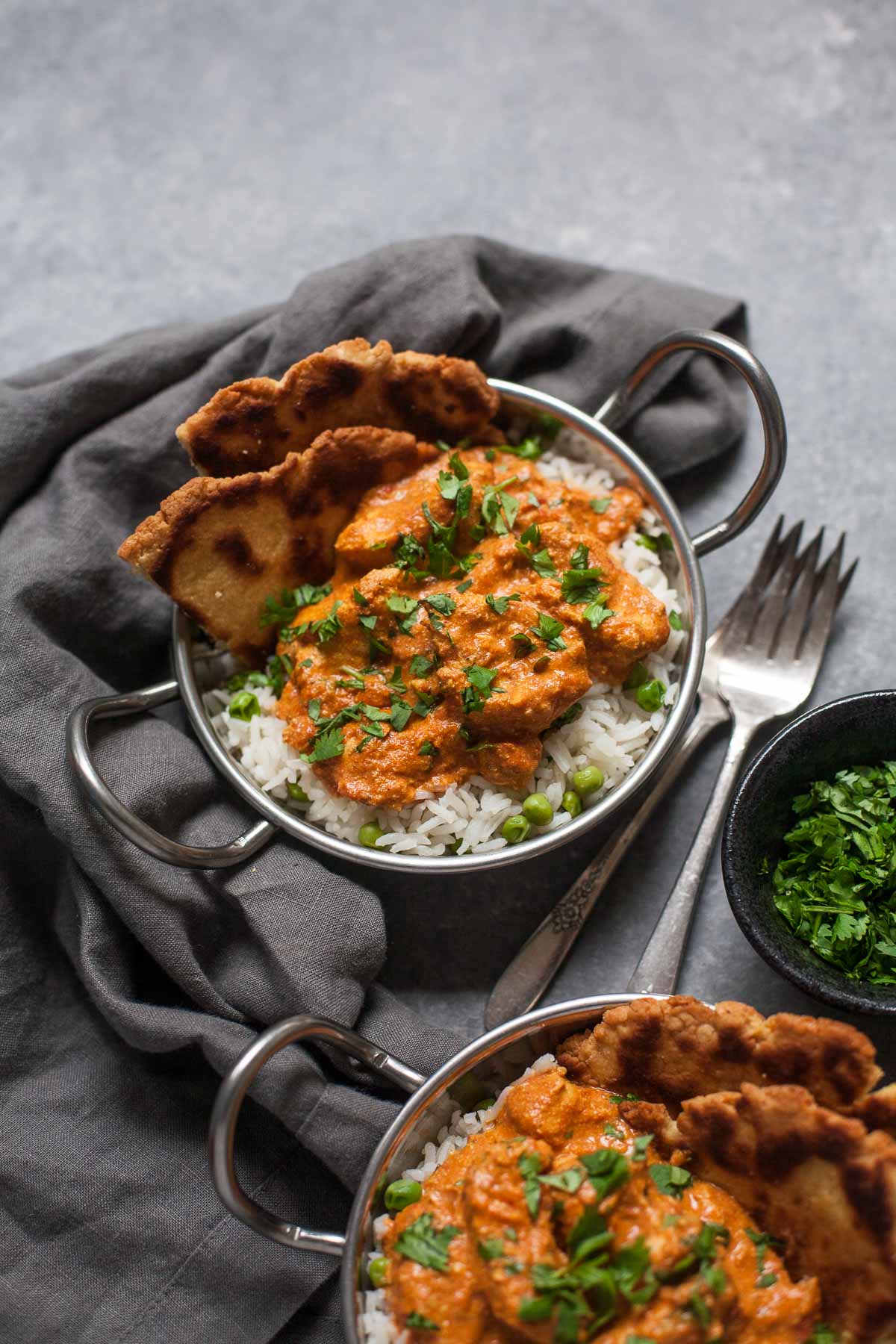 I’ve wanted to make chicken tikka masala for a while now, but was a bit intimidated by all the steps. Chicken tikka is chicken that’s marinated in spiced yogurt and then broiled or grilled, and masala means sauce, so chicken tikka masala needs to be marinated, broiled, AND simmered in sauce. Those three steps are key to building all the layers of flavors that make Indian food so special, though. Once you get going, all the steps can be accomplished pretty quickly, with just about an hour of hands-on time. 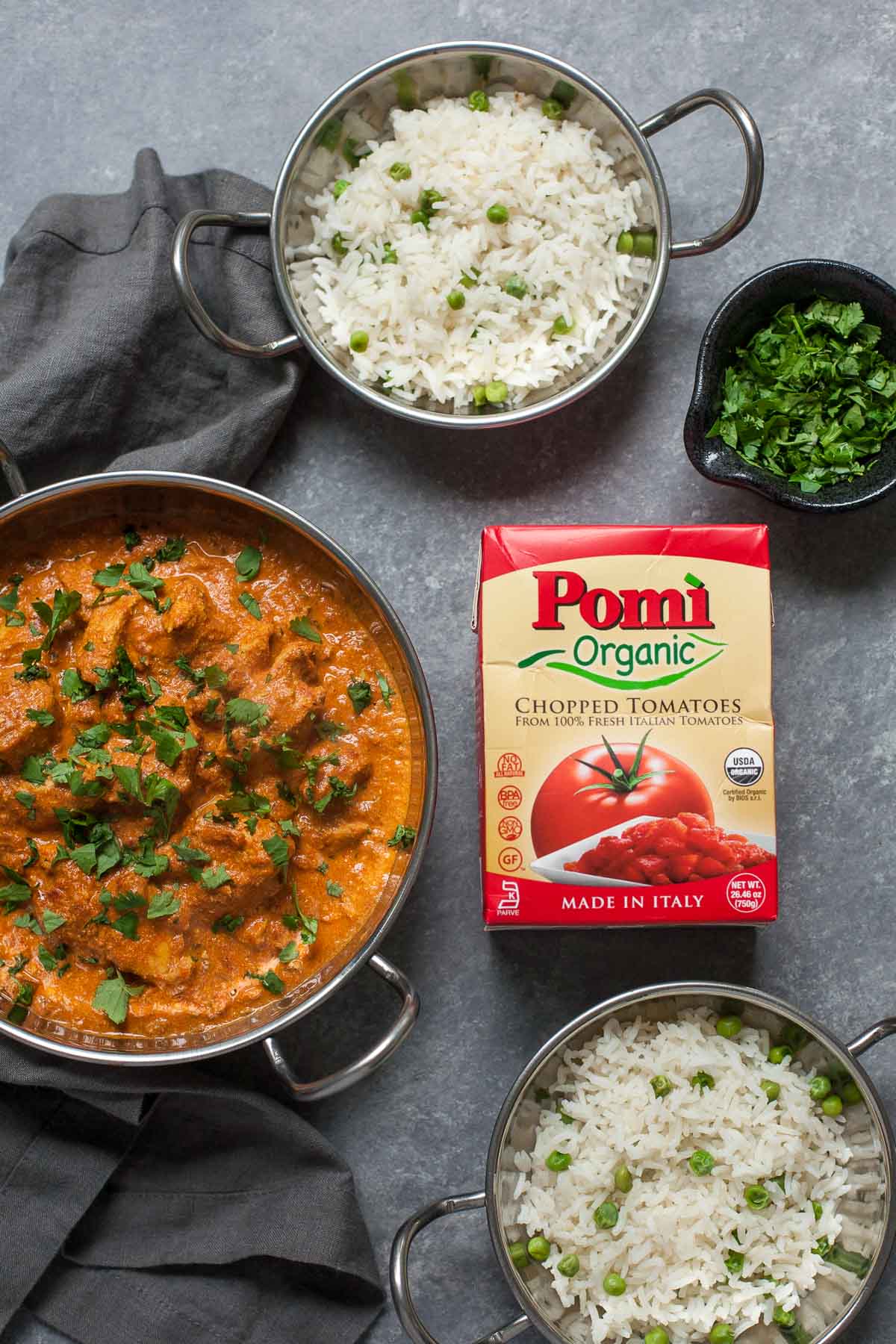 The marinade comes together quickly: it’s yogurt mixed with garlic, ginger, and spices. This stuff alone smells so good! After marinating, the chicken is quickly broiled or grilled to get some of that nice browned taste. The masala sauce gets its flavor from Pomì organic Italian tomatoes simmered with heavy cream. Pomì’s tomatoes are my favorite to cook with because they go from field to package in a short amount of time to preserve that fresh tomato taste. I also love that they’re organic, and that Pomì is committed to sustainable farming and packaging practices. If you’re interested in other recipes I’ve created in partnership with Pomì, check out my Instant Pot (or slow cooker) ropa vieja and Instant Pot short rib ragu. You can also get a coupon for $1 off Pomì tomatoes right here. 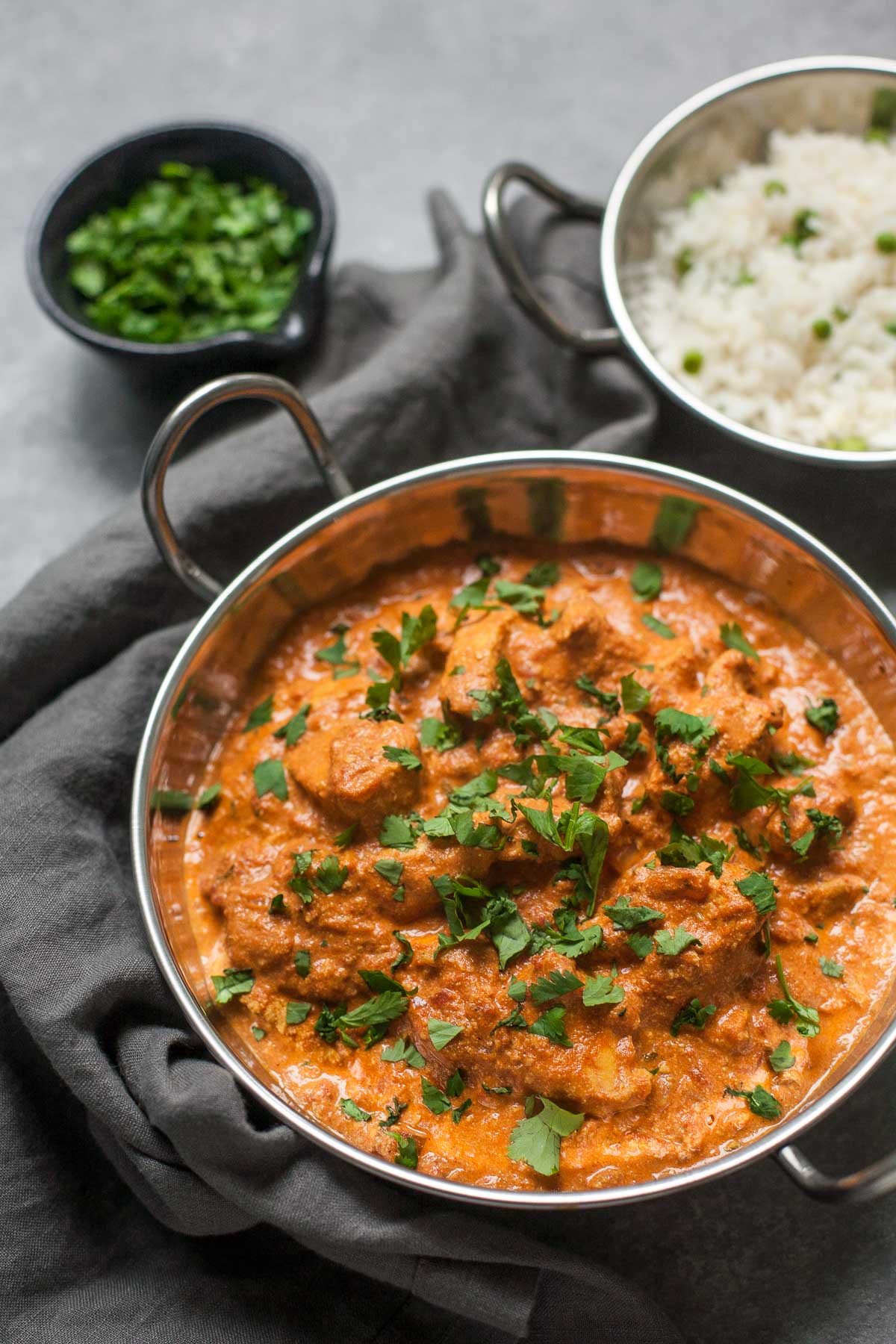 I like to serve this with rice or cauliflower rice and my paleo flatbread, but it’s also great on its own with just a sprinkling of fresh cilantro. This chicken tikka masala is also a wonderful dish to make ahead and reheat, because the flavors will only deepen with a day or two to meld in the fridge.

I hope you give this classic dish a try! If you’re looking for more homemade versions of Indian favorites, check out my saag paneer and Indochinese chili chicken. I also highly recommend making your own ghee!

For the chicken tikka:

I have not tested this because of my coconut allergy, but I imagine this recipe could be made dairy free with coconut yogurt for the marinade and full-fat coconut milk (canned) instead of the heavy cream. 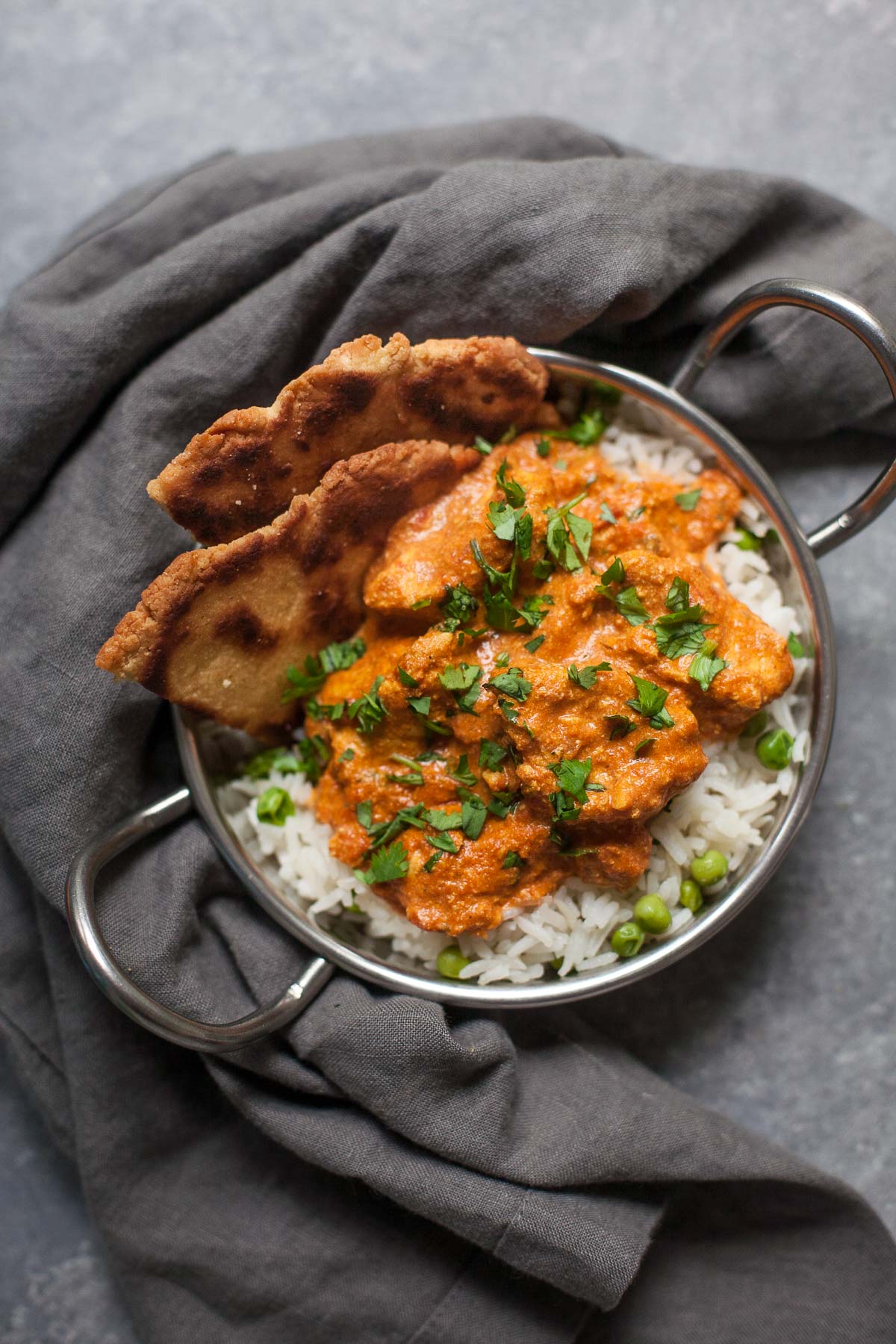 This post is sponsored by Pomì. Thank you so much for supporting the sponsors that help keep A Calculated Whisk up and running! 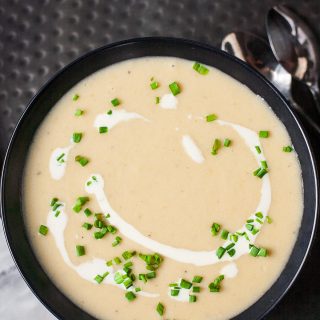